People have been getting married for a long time, and we’ve collected a fair few traditions and customs along the way. Wedding culture and traditions vary across the globe but many of them still hold true today. While some traditions have developed more recently, others are centuries-old and have interesting and unusual backstories as to why they came about.

‘Something Olde, Something New, Something Borrowed, Something Blue, A Sixpence in your Shoe’ – or so the old English rhyme goes. These words are heard a lot by engaged couples in planning their wedding because it’s a well-known tradition that is incorporated into a lot of UK weddings. This isn’t the only wedding tradition out there. Whether you’re considering a traditional wedding or looking to add a few historic customs to your big day, here’s the history behind some of the well-known English wedding traditions and customs you might be choosing between.

This old English rhyme dates back to the 16th century, naming four objects believed to bring the bride luck and prosperity on her wedding day.

What do brides usually use for something old?

The ‘something old’ was adopted to represent the bride’s family and their heritage – hence the object chosen was often a family heirloom such as a piece of jewellery from a relative. More modern adaptations have included sewing in a strip of material from a relative’s wedding dress into your own, we can also support with embellishments such as this at Andrea Hawkes.

The ‘something new’ represented the bride’s new future life as a wife and could often be a gift to the bride from her family. The show-stopping earrings Kate Middleton’s parents gave her for her wedding are an example of this. Today, this part of the rhyme can be adapted to whatever you like – a new shade of lipstick, a new haircut, a new house, whatever takes your fancy!

For ‘something borrowed’ traditionally an item is often loaned to the bride from another happy bride, symbolising happiness in marriage. ‘Something blue’ on the other hand was used to represent fidelity, purity and love. This was often a blue ribbon or something similar.

Lastly, the ‘sixpence in her shoe’ was a symbol for the future prosperity and wealth of the bride and her husband-to-be. Today, you can add an antique coin to your shoes for good luck.

When we think of weddings, we usually think of brides decked out in a gorgeous white wedding dress, but this hasn’t always been the case. It was Queen Victoria who set the trend, wearing a white gown for her wedding to Prince Albert in 1840 with the aim of symbolising purity. In fact, white was traditionally the colour of mourning at the time but it wasn’t long before the Queen had popularised white as the go-to for bridal dresses. Although today you can still find a plethora of white and ivory gowns for your big day, there’s nothing stopping you going for something a little different – such as gold, grey, pink, red, even mustard if you feel like it.

Throwing confetti over the newlyweds as they leave the church has a long history in marriage ceremonies. Originally grains of rice or wheat, confetti has been thrown over newlyweds since pagan times. It was seen as a symbol of the guests wishing the new couple bounty, abundance and fertility. Today, paper confetti has taken the place of its more organic predecessors for practical reasons, which also means that you can tailor this wedding tradition to suit your wedding colour scheme while also maintaining a time-honoured custom. You can also get petal confetti from real flowers if you are wanting something more natural but rice or wheat isn’t your thing.

It’s almost a given that before you celebrate tying the knot, you’ll spend your last night of ‘freedom’ celebrating with your friends on your stag or hen do. Although nowadays this tends to be weeks before the day instead of the night before. While this night of mischief and fun may seem a modern concept, the stag party actually has ancient roots. It can be traced all the way back to Ancient Greece and Rome (who we have a lot to be thankful for on the party front), where it was common that on the night before a wedding a man’s friends and military comrades would toast and feast to celebrate his new life as a husband.

Traditionally, bridesmaids had a much more spiritual role in wedding ceremonies than they do today. While today the bridesmaid will dress very differently from the bride, historically bridesmaids would have dressed the same as the bride to confuse evil spirits who might want to cause harm to the bride, or any more human threats! And a maid of honour was meant as a distraction tactic to protect the bride from coming into harm’s way. So, choose carefully when you’re considering who to name as your bridesmaids for the day, as it’s a big ask to defend you from malicious spirits!

Similarly, a groom would select his groomsmen based solely on their sword skills as opposed to their ability to tell the most embarrassing stories about the future husband in their speech. They would act as the defenders of the bride and groom at the altar, protecting them from any potential threats while the ceremony was underway.

Evil spirits have a lot to answer for when it comes to wedding traditions as they were constantly in need of being warded off. In Ancient Greece, brides wore bright red veils to protect themselves from malevolent demons. In Ancient Rome, brides wore veils that made them look like a flame to scare and confuse spiritual wrongdoers (who apparently weren’t very clever if they couldn’t identify the bride once she put a sheet of brightly coloured fabric on).

In later times, veils were also a way to conceal the bride’s face from the groom until after they were married. This was particularly useful in arranged marriages to prevent the groom from having any second thoughts after seeing the bride. Imagine having an arranged marriage and only seeing your betrothed’s face once you were officially wed!  However, by Victorian times veils were more of a bridal accessory than a safeguard against flaky fiancées. They instead became a status symbol to show the wealthy and social standing of the bride – the longer and heavier the veil the better.

Being carried over the threshold

Crossing a threshold has long been a signifier of a rite of passage, and marriage is no different. In many cultures, carrying the bride over the threshold of a house was seen as signifying the bride (and groom’s) transition from childhood to adulthood. It is a tradition that dates back thousands of years, as far back as the Ancient Romans.

During the wedding ceremony, the bride would be expected to pretend to run back to her family in a last ditch attempt to avoid matrimony, only to be carried off to her new home by her now husband and his groomsmen. Shockingly when ‘marriage by capture’ was still considered perfectly acceptable, sometimes brides weren’t pretending to run off from their new husbands. Carrying the bride over the threshold was also seen as a way to protect the bride from pesky demons and spirits trying to get to the bride through her shoes. Although carrying a bride over the threshold has somewhat fallen out of fashion in recent years it is seen as a romantic and intimate ceremony that can be shared between just the bride and groom.

Whether it’s modernising an age-old wedding tradition or creating a tradition of your own, we firmly believe that each wedding should be personal and individual. At Andrea Hawkes, we place the bride at the heart of what we do. From making bespoke, individual wedding dresses to adding a personal touch to the wedding dress process, we ensure that our brides receive our full personal support and expertise when finding and creating their perfect wedding dress.

From wedding dress ideas & inspiration to how-to guides and expert know-how. You'll find everything you need in the run up to your big day and beyond on our bridal blog! 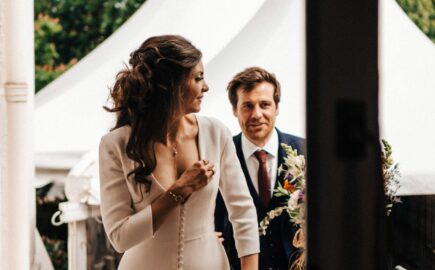 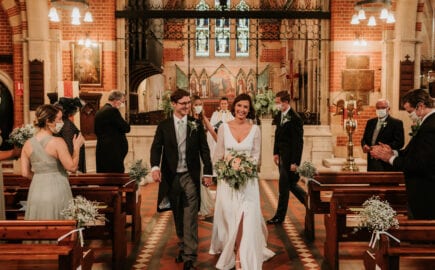 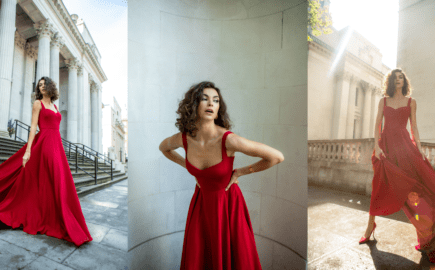